Greta Thunberg the teenage environmental activist from Sweden has held a live conference in Plymouth before her departure across the atlantic ocean to the global warming summit.

She was asked a huge range of questions during the live conference as well as speaking about what she aims to do, the impact she is hoping that it will have and the challenges she will face.

She spoke out saying that she is hoping to motivate others to look for alternative forms of transport and remove the demand for diesel and oil. We do need these actions now as this is a race against time.

When asked about what she thinks about the media being here today Greta Thunberg also said “its great that the media wants to write about climate related subjects even though there are many other more relevant stories than this.”

She wanted to make it clear that she is not telling anyone what to do or what not to do but instead is doing it because she wants to do it herself and am one of the very few people who can do this and truly believes that she should take this chance to make a difference. 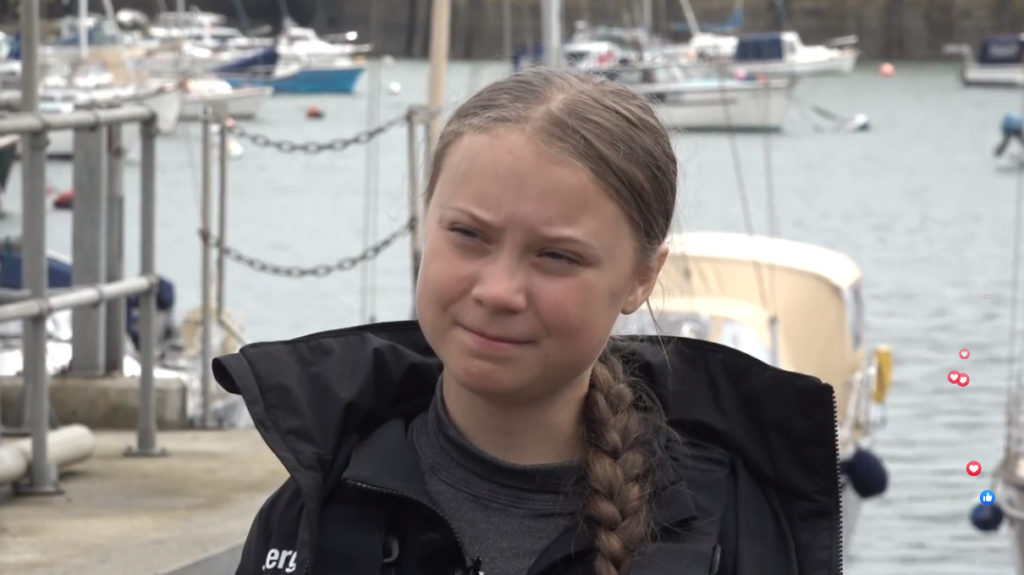 Greta went on to say that she thinks it will be a good challenge as there are always going to be people who don’t understand or accept science and but she will just ignore them because she is acting on science and if they don’t like it there is no point trying to change their minds so she will focus on the people who can be educated and informed from a scientific point of view.

She was then asked by another reporter about the reaction she is expecting to receive from others when she arrives there to which she said “I am not concerned about reaction I’m concerned about whether we will do something or not and whether the people in power react with the necessary force. Or course there are climate delayers who want to shift it to something else or question it but I am not going to worry about this I am going to do as I want to do to have the most impact.” 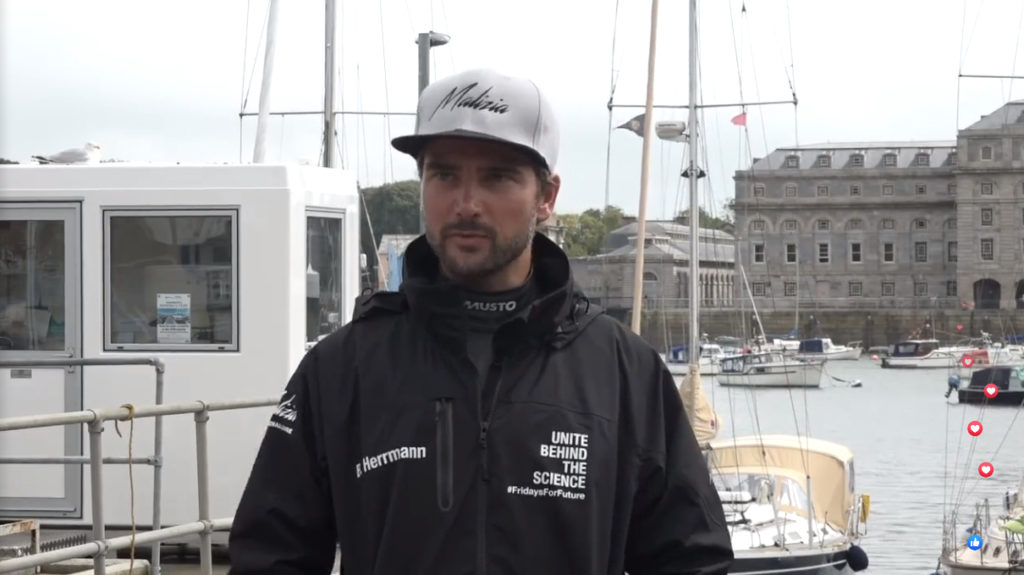 What kind of welcome have you had from the UK?

I have had a very warm welcome I haven’t been public about where I am going but I have been welcomed by people I know and who are helping me along the way.

A reporter for The times then decided to ask a question that some have been asking online regarding the way that she is travelling to the summit:

You want to attend two conferences, you could have spoken by video link and set an example, what do you say to that?

Of course I can do that and I have attended several by video link but my experience is that those attendances doesnt get any attention and I have been invited to speak not to speak on link and I think it will do good if I and the young people were actually there rather than by video link.

Where do you get your strength and will go to forward is it from the worry or is it anger?

I think I get my energy from knowing that this is a very big problem and I have read a lot and I understand the problem and I decided I will do everything I can. The dedication I have is from knowing that I will do everything I can and also the fact that some things are actually changing especially the mindsets of many people even if that is not enough and not fast enough at least it is something and not for nothing. 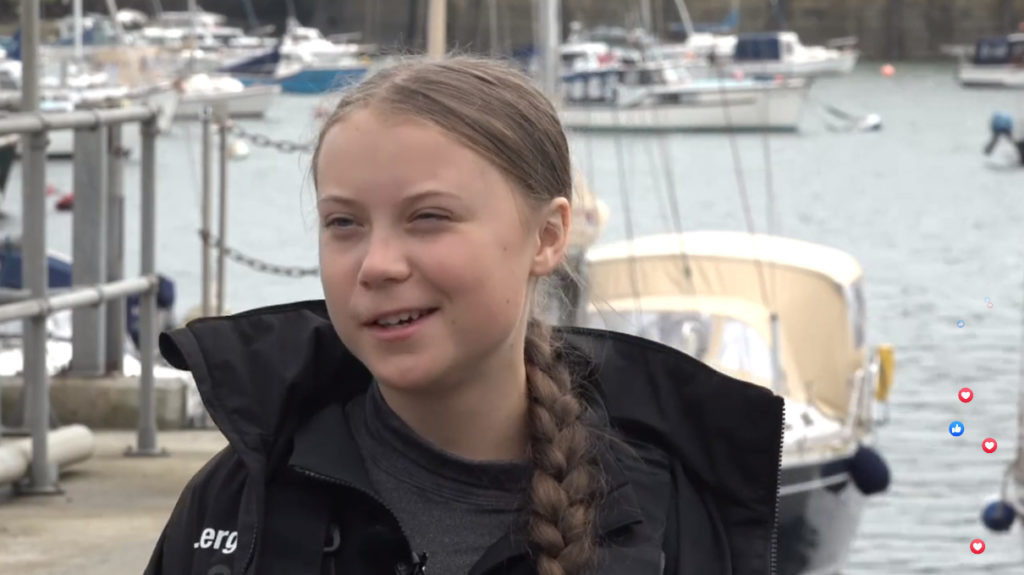 You’ve met with many world leaders like the pope, do you think you can make trump reconsider climate change?

No, I don’t see how if I am just anyone, I am not that special I can’t convince everyone instead of speaking to me and to the school and teenagers he should be talking to scientists in this area.

Greta Thunberg went on to say that “people can do what they want, I think the trip will be quite an adventure and an experience for me at least and I expect it to be challenging and good most of the time.”

The oceans are crucial as every other ecosystem and regulating the climate and it gives us much of the air we breath. We are in a crisis not only a climate crisis this is also happening in the ocean and we are also facing an ecological crisis which affects not only the climate and weather patterns but the environment.

You inspire me every day and your message has spread around the world, what advice would you give to me if I want to do the same?

In the beginning my voice wasn’t heard as were many others and I just tried different ways until I found some kind of method which made my voice heard its different for each individual and you have to be create and come up with something new. There is so many things you can do and because this is such a global problem it needs to be tackled from every angle, you can do so much.

When asked about her plans Greta said “I am going to take it step by step and do as I feel, I don’t have anything planned but I am going to travel around there for I don’t know how long as I want it to be lose and not to have a tight schedule because I want to change things as time goes by. 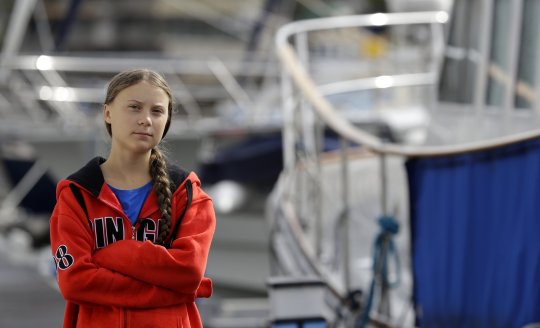 Greta Thunberg went on to explain that it incredible that so many peoples voices are getting heard because of the work she is doing and that we are all fighting for the same changes which is very important. It doesn’t matter who does it as long as someone does so that we can fight with dedication for a better world.

Greta Thunberg was then asked about the trip to which she said “I don’t know what the trip will be like I will have to wait and see our practice was fine and shes never done it before so she cant say what the biggest challenge will be but will find out.”

These few days preparing and packing has been good the team have been incredibly helpful and I am eternally grateful to them for what they are doing and I think it is very brave of them to do something like this. They contacted us because they heard I was looking for a way to get across the Atlantic ocean and we have considered every option and they sounded most sincere and dedicated so we chose them. 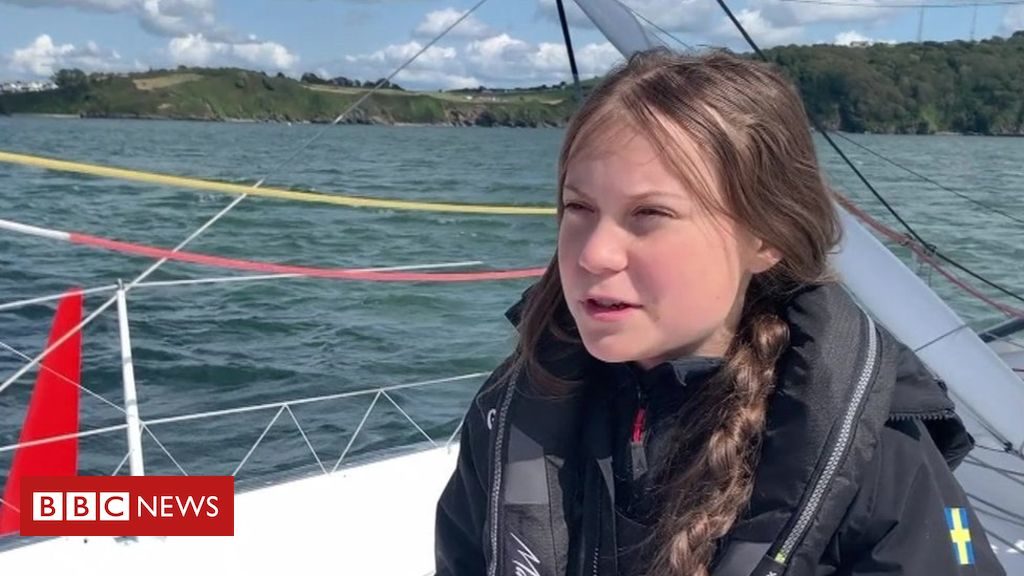 Are you looking forward to seeing marine life?

Yes I am very much looking for ward to seeing marine animals that will be an experience.

The anniversary of your first strike is when you are in the Atlantic how will you mark it?

It is 20th august, a Thursday I think. I will see how I will celebrate that day, I don’t know how to celebrate it yet as I don’t know what I’ll be doing that day.

How do you pronounce your name?

I don’t care how its pronounced.

You are travelling with your father, did you bring anything personal on-board?

of course i bought many personal things like not many clothes, books, board games that doesn’t fall around and a rabbit which i received from someone I know for this trip.

is there an next step or another plan to increase pressure after this?

Not any big specific plan as I always say I will have to take it as it comes and work together with other people, activists and experts to try together to make as much difference an improvement as possible

what do you say to millions of other teenagers who dream of going to america?

That’s not something I can answer, they can go there if they want too I think that is something you have to tell someone else. 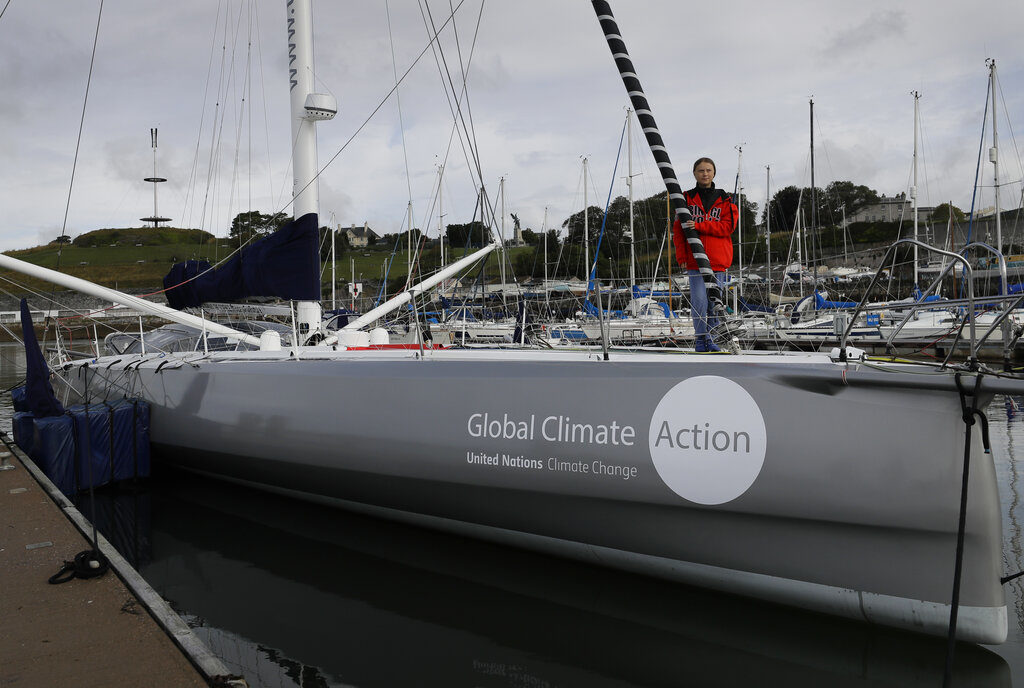 Whats the most important thin to achieve?

If I was to choose one thing that would be achieved from this trip or summit then I would say increased awareness amongst people in general so people realise we are in an emergency so that they know the background and what is required to prevent the worst consequences as if enough people are aware they will create international opinion and altogether we can put pressure on people in power so they will have to do something.

This is such a big global issue which goes beyond areas and this needs to be tackled from every possible angle and sport reaches a lot of people which can be useful in spreading awareness of this.

Will you be doing any of your school studies?

I wont need to do it as I am taking a gap year but i will definitely never stop learning and if I get bored I will start to read about something I find interesting. I always find time to learn more.

Greta Thunberg then ended the press conference to an applause and people shouting “Greta we love you you’re brilliant.”