the Brazilian embassy in London has been the center of a recent protest against the Brazilian governments killing of environmental activists in the country who are fighting for Brazil to stop destroying the forests and wildlife within it.

One activist even glued his hand to the door of the Brazilian Embassy in a protest against the criminal damage that is currently happening to the rainforests as well as the illegal mining. 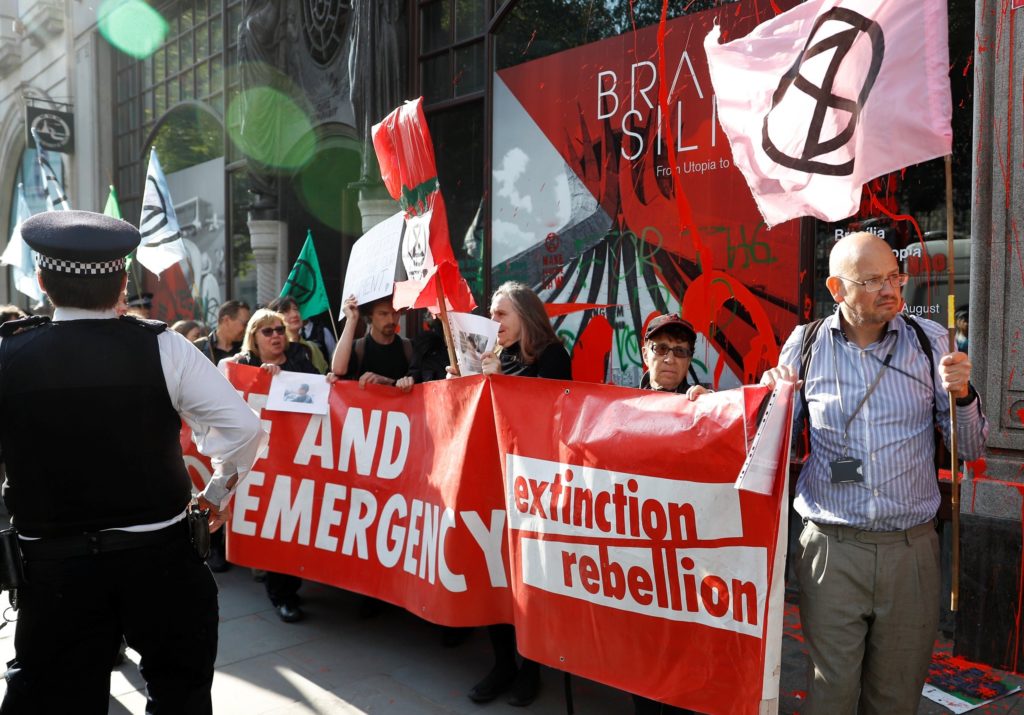 The group which is called Extinction Rebellion is a non-violent socio-political movement which uses civil disobedience in order to protest against climate breakdown as well as a number of other points.

They want to spread the word about the imminent social collapse that is happening right now, they have a very shared vision of change and want to create a world that is fit for future generations.

The protest included people climbing onto the entrance to the embassy which has as veranda and covering the walls and windows in graffiti such as “For the wild” and “No more indigenous blood”.

The protest wasn’t just in this country either, Extinction Rebellion targeted the Brazilian Embassies in 11 countries around the world including Spain, France, Portugal and Chile. 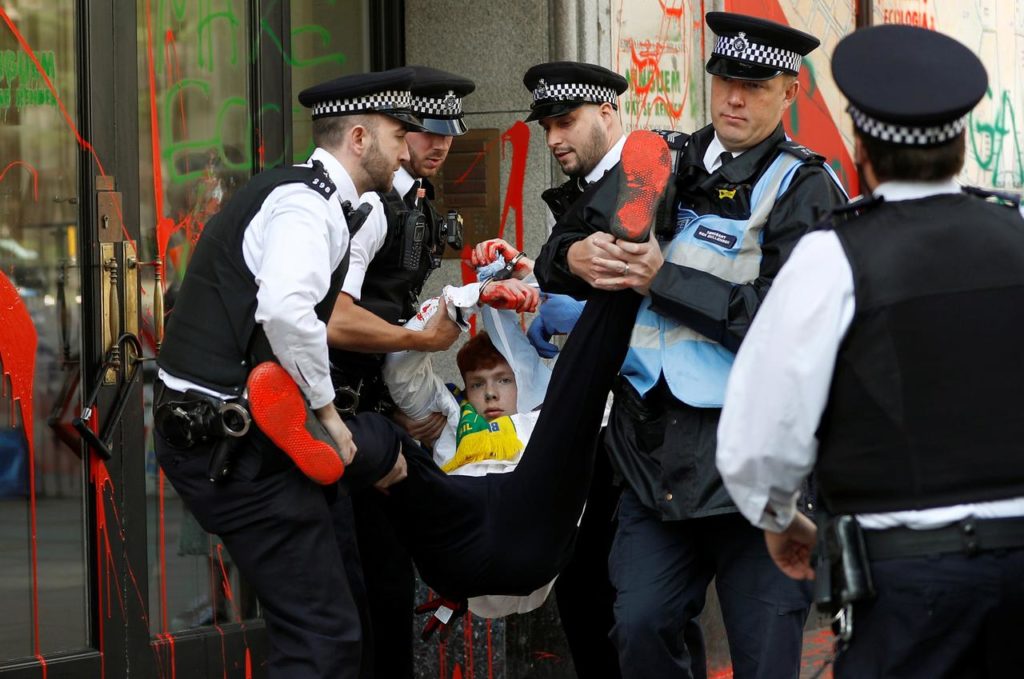 Activists threw fake blood all over the walls which covered their hands too whilst other activists on the ground held banners and chanted the names of environmental activists that have died fighting for action.

They are fighting for attention to be brought to this huge ecological issue and claim 40% of the people who have died have been indigenous people who are simply fighting or their home and lands.

The vast deforestation is putting un-contacted tribes in danger as well however illegal loggers and militia don’t seem to care as they clear immense areas of rainforest every single year. We Recently covered a post about WWF and their supposed efforts at stopping deforestation by partnering with logging companies to monitor and limit the amount of deforestation and how that is not exactly working out in the favour of our planet but more lining the pockets of the WWF and the logging companies pockets instead. 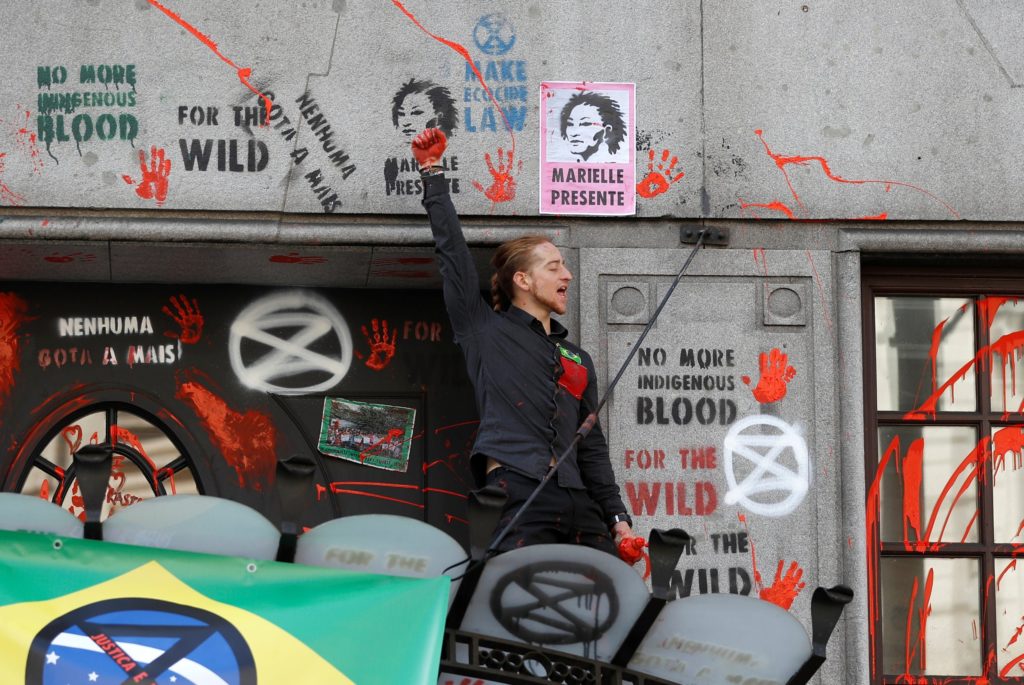 Juan Doblas who is the senior geo-processing analyst at ISA said that the situation is “very worrying” and that there is a huge amount of risks involved with contacting these tribes as well as knocking down such a large amount of trees but this seems to be going unnoticed by the Brazilian government.

The indigenous of Brazil are particularly vulnerable as they lack immunity to disease carried by outsiders which poses a huge risk to them and this is definitely not being thought about when contacting them currently. 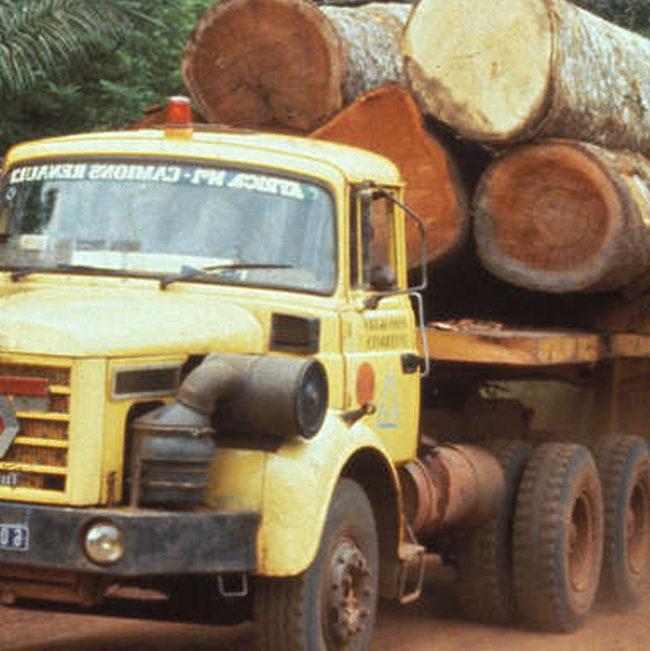 WWF “Greenwashing of the Year” award